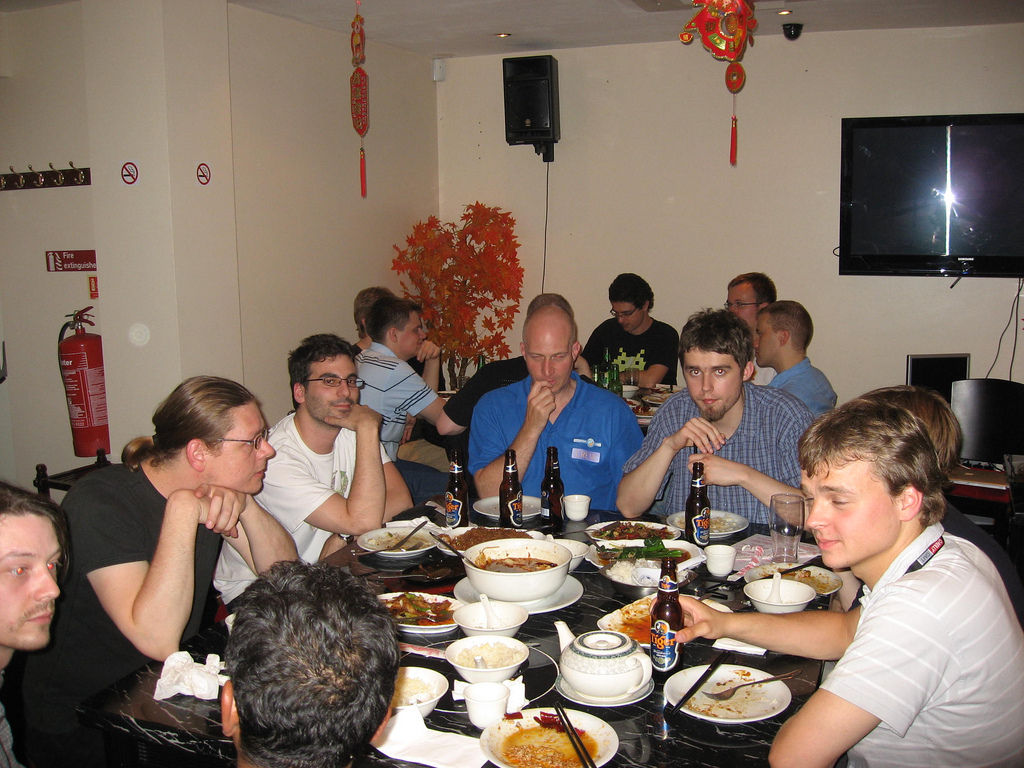 The photo shows some of the Resolver Systems crew enjoying a meal together at the 2009 EuroPython in Birmingham.

I love the word rigour. It conveys either, or both, strict discipline or something that was really hard work.

I’ve been rigorous in my discipline in meditating. I’ve meditated for an hour a day, generally six days a week, for a number of years now. A dedicated and regular practise of focus and letting go of distractions, which is the substance of mindfulness practise, has made a difference in my life and my understanding of myself.

My trade is as a software engineer, a computer programmer. I taught myself to program by becoming really passionate about it. What you love you learn. I learned the art and craft of engineering in my first professional job, at a small startup in London called Resolver Systems.

There, for the four years I worked there, we rigorously applied the principles of Extreme Programming, a strict variant and really the progenitor of the “agile” movement. The goal is engineering processes that make the development process agile and fluid, able to change direction quickly and able to check that it is continuously delivering value in the work being done, whilst also creating the software in ways that ensure as much as is possible you are creating a quality and useful product.

This includes full Test Driven Design (often now called “test first” in a great misunderstanding of the value of TDD), with a full test coverage from unit to functional (full stack). We had about three to four times more test code than production code. We built a beautiful thing.

It also included full pair programming. So for four years we worked together and thought together and learned together. The product failed, unfortunately, an idea ahead of its time. With Python finally being added to Excel as a scripting language it’s possible that the idea of applying proper engineering principles to the creation of complex spreadsheets may have its day after all.

Contrary to perhaps what we thought in the honeymoon phase of learning “agile” it isn’t a magic silver bullet for curing all ills of software engineering. However, agile processes do stand in stark contrast to the traditional “waterfall” model of software enginering. A strongly waterfall process is very hard to change, which is precisely why they’re such a bad idea. Perhaps we can summarise the essence of agile as “finding engineering processes and practises that are able to evolve and suit the specific needs of the team, product and customers”. Being able to change matters, being stuck is awful.

This post originally appeared on my personal blog A Love Letter to Agile on Unpolished Musings.